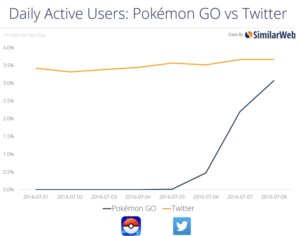 How Does Pokemon Go Influence Marketing and Analytics?

I am fascinated by the Pokemon Go phenomenon and am amazed by the success of a release of a game 5 days ago or so. According to Forbes, Pokemon Go is on pace to surpass

Vlamis – Technology and the Individual

I have spent some time observing and coordinating with the people in the office in an attempt to understand how technology fits in our work and how it fits in our culture. Having also been the fulcrum for specifying and procuring equipment has given me a lot of information that I hope to delineate here in a set of suggestions for an ongoing internal IT procedures and (I hate this word > ) policies.

In the 14 years I have worked here, I learned that I was taught a lot of wrong-headed and “old” business theory that applies well to filing cabinets, but are awful for electronic devices. Business computer equipment in the 70’s-80’s was often built to be permanent installations and long-term investments like manufacturing equipment. In the ancient world of the IBM PC 286, it was advised to leave your computer on because the electricity it used was less expensive than replacing the power switch. In hindsight, that was not realistic. I have been told of an architect that purchased integrated workstations for his drafters that had an integrated pencil and paper drafting table with built-in CAD computer hardware and software. All encased in beautiful high-tech looking plastic, these were the top of the line and built to last. The architect spent $30,000 on each of these workstations. They were utterly obsolete in about 2 years and the “investment” helped sink his firm and it did not ever recover.

My first day at Vlamis Software Solutions (August 2000) revealed the stifling nature of how technology was viewed in the larger companies I had worked for. The mouse that was attached to the desktop PC I was assigned was a trackball. I abhor trackballs. I figured I was stuck with it. I gave it a shot. I couldn’t do work with it. So I asked Dan where I could find a different mouse, and if we were out of them, what kind we were supposed to buy and from where. He looked at me like I didn’t understand how life worked. “Go find a mouse that you like and will help you be productive, and if it is under $100, just buy it with your credit card.”, Dan said (give or take).

My 14 years ago brain screamed, “What? No. You don’t understand. There are approved things that are part of the company standards that are one-size fits-all. You buy these things in bulk and when it goes bad, you have to beg an IT person or other supply strangler to replace it with another sub-optimal thing. This man in front of me doesn’t understand how businesses are supposed to work.”

I have a scar on the tip of my middle finger. That scar wore a pattern in the plastic of the right-mouse button of the mouse I picked because I ended up using it so long. My productivity was increased and even though the mouse was one of the expensive new ‘laser’ mouses (mouses point, mice squeak), it cost less in the long term because I bought something based on my knowledge of my working habits and how I used technology. For the cost of $40, I felt more empowered, more respected, more trusted, and more of a part of this company than any results I had from the thousands of dollars spent by the corporations I previously worked for with their silly team building exercises and free bad-coffee and donuts training.

The incredibly personal nature of technology and the absolute impermanence of it makes a compelling case to allow freedom of choice with personal electronics.

There are some benefits to standardization. A stack of identical laptops will allow for trading and loaning power supplies. You can exchange parts from one to the other. You can test software and configurations on one machine and have reasonable expectation that it would work for all of them.

The reality of what actually happens in Vlamis is that a laptop and its associated hardware are given to one person and there is so very little “sharing” of that equipment. I cannot think of an example of it ever happening. Beyond that, each person’s list of installed software is not the same and there has been little opportunity to realistically do “real” configuration testing. When our laptops have an expired warrantee, we move to a new one, not continue to repair them. After three years, laptop hinges are weak and the case is scratched/dented and worn. Bringing an out of date and worn laptop does not reflect the image of the exclusive boutique business intelligence consultancy we are. I believe that what little benefit there is to strictly standardize is far outweighed by the benefits of allowing a personal choice based on the users’ knowledge of their work habits.

In visiting the development areas of a verly large company that is one of our clients, I noticed rather quickly that there was very little computer equipment that was not unique to each user. Laptops were of many shapes and sizes. Mouses and keyboards had rainforest-like “biodiversity”. Some happily pecked away at a lightweight and very portable laptop, while others had powerful mobile workstations. Not once did I hear a single complaint about an electronic device that was issued by the company. If a corporation as large as the one I visited cannot gain an advantage at their scale for standardization of equipment for developers, how could we?

We do need ways to work together and whatever technologies we choose need to allow for this. The counter-point to this concern is that it isn’t 1995. I saw a picture recently that parodied the Apple “Mac Guy” and “PC Guy” advertisements. The tagline was something like “It doesn’t matter which one you pick. You are only going to use it to look at Facebook and Netflix anyway, so they are exactly the same thing.” This is a curiously strong statement. The vast majority of what we do is now either browser-based or virtual machine based. The “thick client” Windows/OSX/*nix compatibility issue has been tackled by our esteemed Director of Technology. He uses virtualization to allow him to use Windows 7-based programs directly inside his OSX operating system. I’ve seen this in operation and it is really slick and just works. His choice of using a Mac has had very little impact on servicing our clients, even VPNs work for him. That doesn’t mean that there haven’t been challenges to configure cross-compatibility, but there hasn’t been a problem that has not had a functional work around.

I find that I am pontificating. It doesn’t seem to matter much what color, size, shape, or interface the machine is, as long as the person using it is comfortable with it and they can be productive with it, there is little benefit gained by insisting on standardizing on specific technologies and it is likely that constraining our staff to use only the one thing that some person has arbitrarily decided is “right” decreases productivity and morale.

So what do we do now? Give everyone a credit card limit and say “Go buy some happy!”? Well, that isn’t very realistic. Some people have little interest in this at all and would go buy a nice red one, but it may not meet their needs because they didn’t realize they even had the need. Some will need to have pre-chosen and pre-approved choices laid out in front of them or they won’t ever chose. Some would much rather have a list of requirements that their machine has to fit and that they can go buy that one perfect machine for themselves.

Our laptop requirements, my top 3 picks, and the conclusions I came to are below the fold.

Mooers’ Law and the Challenge of BI

Want to Receive Updates from Vlamis?