The Four Realms of Analytics 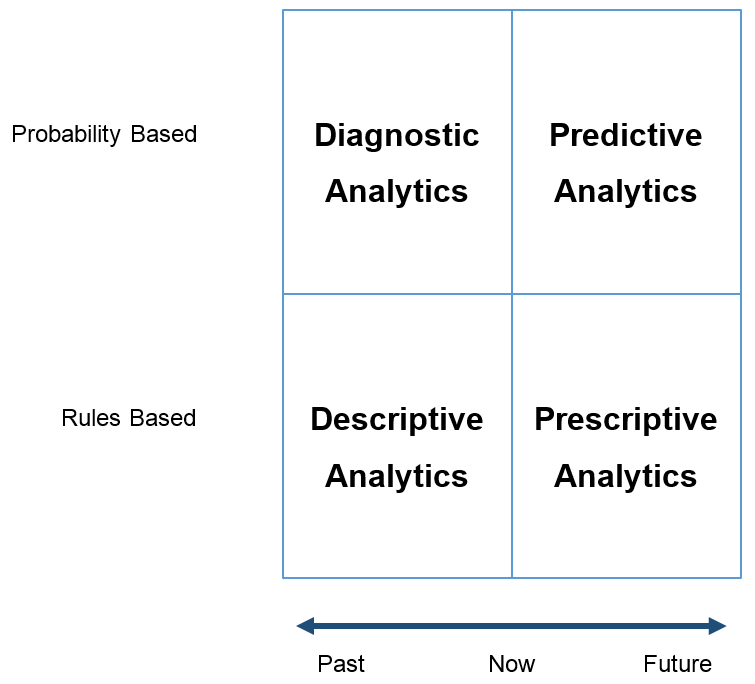 The four realms of analytics: descriptive analytics, predictive analytics, prescriptive analytics, and diagnostic analytics can be organized along a dimension from rules-based to probability-based and the dimension of time (past and future). This simple two-by-two matrix offers a powerful framework for organizing and describing the differences between analytical processes. While the four realms are often cited, they seldom appear without there being considerable confusion in understanding the distinctions between them. Rather than relying on dictionary definitions and unspecified connotations, this simple framework is offered as a way to communicate different types of analytics to lay audiences.

We do a lot of work introducing the field of “analytics” to broad business audiences. Most everyone acknowledges that businesses will have to be more “analytically adept” in the future. That is, as more and more business functions are informed and improved through the use of analytic data processing, more people within an organization will be involved in producing analytics. As more data is presented to executives, managers, and employees throughout organizations, the minimum required level of skill in understanding and consuming analytics is rising all the time. The term “analytics” does not mean the same thing to all people (particularly those who are involved in the field!). I’m a firm believer that the vast majority of people already have decent analytic capabilities and competencies, they just need organization to their thoughts and understandings. Organization helps in several ways, it helps prevent the misapplication of intuition that may work well in one situation to another where the same intuitive idea is either unhelpful or even harmful. Organization helps people talk about analytic methods and applications. Many times people understand the ideas (even when they may not understand the algorithms and math) of analytics, but get frustrated in communicating with others. In short, I’m interested in developing frameworks that help organize and communicate the broad range of analytic processes and use to business audiences.

I fully accept that all frameworks or models lose information in their attempt to simplify, so I don’t see these frameworks as being perfectly consistent, just that they’re useful. I also recognize a lot of very similar work has been done by others previously and that I’ve benefitted from reading others’ work on analytics frameworks. I’d like to know if I’ve exactly, precisely replicated someone else’s frameworks unconsciously.

The first framework I call “The Four Realms of Analytics”. The idea is to take a standard, broad categorization of analytic processes and organize them along two dimensions. The categorization has four members, Descriptive Analytics, Diagnostic Analytics, Predictive Analytics, and Prescriptive Analytics. The X axis dimension is time and can be read as a time line extending both into the distant past to the left and to the distant future to the right. The Y axis is a bit more conceptual, but is separated into two general realms, that of conditional statements or “rules” and that of likelihoods and probability distributions. At the bottom, simple “if then” statements apply. As one moves up the axis, the conditions become more complex and represent distribution functions rather than discrete assignments or delineations.

One point to make explicit is that the four cases are well established in analytics literature. They are placed in their “most logical” position according to how they are generally understood; the lines between the quadrants are not perceived as boundaries restricting the definitions of the four cases. For example, certain descriptive analytic techniques may be used to help describe or characterize potential outcome states in a predictive analytic process. Likewise, a certain degree of the predictive analytics realm is included in the prescriptive analytics realm as algorithms are applied and outcome rules are developed.

The upper-left quadrant representing the intersection of probability based systems and past time frames is labeled as “Diagnostic Analytics”. Diagnostic Analytics is all about making “why” statements. Think of causal inference and the comparative effect of different variables on a particular known outcome. While diagnostic analytic processes often include a substantial amount of description and characterization about data elements, their primary use is to develop insights on the sequence and comparative outcomes of past events and states. While Descriptive Analytics might be concerned with describing how large or significant a particular outcome, Diagnostic Analytics will be more focused on determining what factors and events contributed to the outcome. Much of Diagnostic Analytics lives in the area of probabilities, likelihoods, and the distribution of outcomes. As more and more cases are included in a particular analysis and more and more factors or dimensions are included, it may be impossible to determine precise, limited statements regarding sequences and outcomes. Contradictory cases, data sparseness, missing factors (the “unknown unknowns”), and data sampling and preparation techniques all contribute to uncertainty and the need to qualify conclusions in Diagnostic Analytics as occurring in a “probability space”. Training algorithms for classification and regression techniques can be seen as falling into this space since they combine the analysis of past events and states with probability distributions (although they are often not necessarily included in many definitions of diagnostic analytics). Examples of Diagnostic Analytics include attribute importance, principle components analysis, sensitivity analysis, and conjoint analysis.

In a sense, the emphasis of the top left and the bottom right (Diagnostic and Prescriptive analytics) are on actions and decisions (past and future) while the bottom left and top right are on characterizations and descriptions (past and future). Developing predictive models (the “training” and “testing” phases of a model) falls into the realm of Diagnostic Analytics while the application of a previously developed model falls into the realm of both Predictive Analytics and Prescriptive Analytics. The evaluation of results often falls into the realm of Descriptive Analytics. This emphasis on “what is the motivation for performing analytic processes?” in combination with either a backward looking emphasis or a forward looking emphasis helps bring the business goal or objective front and center. It should be noted that while decision making is often at the center of the motivation (as it is in the Prescriptive Analytics realm), it isn’t always the immediate motivation. Sometimes improved understanding and insight along with pattern detection and differentiation is the immediate need. Other times we’re more interested in having an automated process for making a prediction and less interested in understanding the model behind it.

We see business people who are just starting to get involved in learning more about analytics get wrapped up in processes and algorithms and lose focus on the key issue of motivation. In a similar vein, it isn’t unusual for experienced data scientist/analytic developer types to get lost in what can be admittedly complex and intricate processes and forget to place the results of their analyses within a context of a desired result.